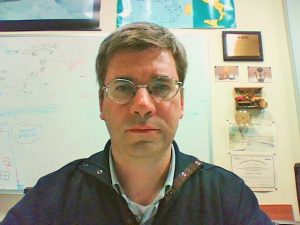 From 1995 until February 2006 he has been a researcher at CoreCom (research consortium supported by Pirelli and PoliMi in Milan, Italy), where he achieved the position of Head of the Optical Networking Laboratory.

On March 2006 he joined the Department of Electronics, Information and Bioengineering (DEIB) at PoliMi as Assistant Professor. On January 2015 he became Associate Professor in the same department (permanent position – public employee – after passing a nation-wide Italian “Abilitazione” competition in 2012). On June 2021 he obtained the National Scientific Qualification to function as Full Professor in Italian Universities (“Abilitazione Scientifica Nazionale – Prof. Ordinario”).

At the School of Information Engineering at PoliMi, he has been teaching several courses in the area of networking, both for undergraduate and master students. Currently, he teaches “Fundamentals of communications and Internet” at the undergrad level.

He furthermore has kept and is keeping topical courses for employees and executives of various ICT companies, such as: Pirelli, Telecom Italia, Italtel, Nokia Siemens Networks, Sirti, Metroweb, Alcatel, SM Optics, Ericsson. Topics of these courses have been, for example: Metro Ethernet, Passive Optical Networks, MPLS, Optical Transport Networks, Software Defined Networking. He has been Director of the course “Skill development for IT managers” organized by Cefriel and Politecnico di Milano for ATM S.P.A.. (2017-2018).

He has participated in several joint research projects with industrial partners (Pirelli, Telecom Italia, Fastweb, RFI, BTO). He is principal investigator and research responsible for PoliMi of an industrial contract with ATM (2019-2021) and has been in the same position for a PoliMi research contract with TIM for two years (2013-2014).

He has been involved in the IST-FP6 and FP7 European Projects: MUPBED, NOBEL2, e-Photon/ONe+, BONE, STRONGEST, (IRSES) MobileCloud. He has also been involved in the EIT-ICT project SOFNETS and in several Italian National research projects (Progetti di Ricerca di Interesse Nazionale – PRIN) funded by the Italian Ministry of University and Research, the most recent of which has been ROAD-NGN. He has been recently involved as the leader of the PoliMi team in the H2020 EU project METRO-HAUL.

He is the author or co-author of almost 100 papers published in proceedings of international conferences and about 50 papers published in international journals on networking and optical networks. As of October, 2022, his bibliographical metrics (Google Scholar) are the following: 2742 citations, h-index 26. He is co-inventor of 6 patents with extensions in various countries, including Europe and the U.S.

He was General Chair of IEEE NetSoft 2022, DRCN 2020 and DRCN 2021, has been TPC chair of IEEE HPSR 2019, TPC chair of NOC 2014, Publicity chair of ONDM, QoS-IP and ICCCN, and TPC member for several international conferences, including: IEEE ICC, IEEE GLOBECOM, IEEE Infocom, SPIE APOC, ONDM, HPSR, NOC. He is a member of the editorial board of Optical Switching and Networking (Elsevier, i.f. 1.9) and has been guest editor of two special issues of the journal. He is the lead guest editor of a special issue of the IEEE Open Journal of the Communications Society. He served as a reviewer for many journals including: IEEE Transactions on Communications, IEEE Transactions on Computers, IEEE/OSA Journal of Lightwave Technology, IEEE Transaction on Networking, IEEE Network Magazine, IEEE/LEOS Photonics Technology Letters, IEEE Journal of Selected Areas in Communication, OSA Journal of Optical Communication Networks, European Transaction on Telecommunications, IEE Electronics Letters, etc.

He is a member of the IEEE Communications Society since 1998. In 2008 he has been elevated to IEEE Senior Member.